The idea, the desire and the need to build a funicular railway to connect the Ljubljana Castle with the old town centre date back more than a century. 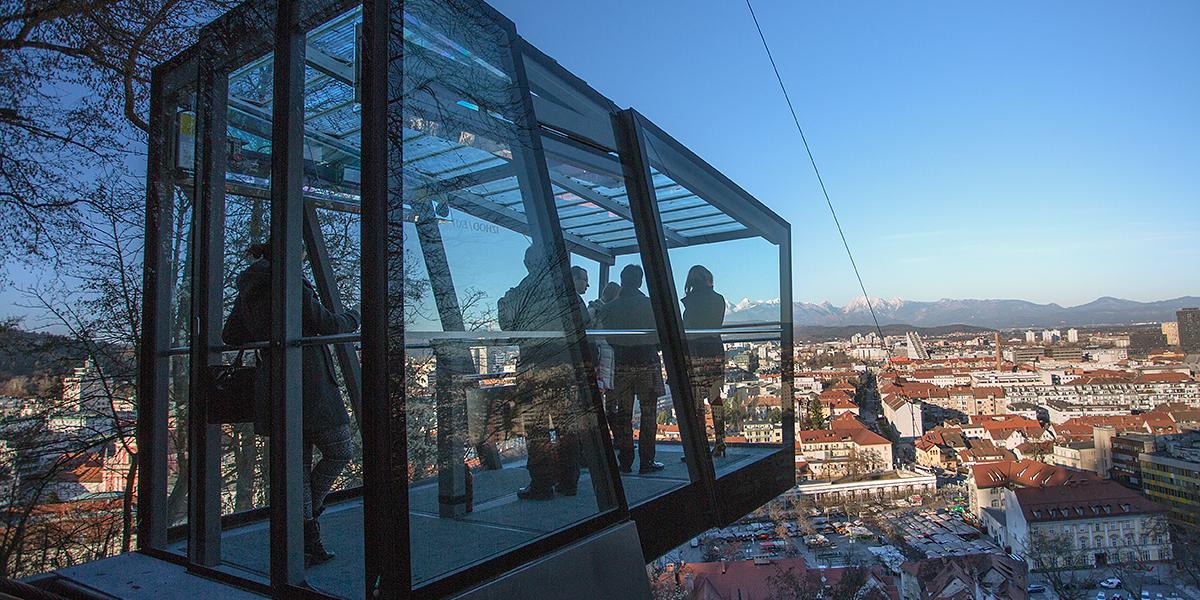 The modern and unobtrusively designed funicular, which complements the traditional cultural identity of the Ljubljana Castle, is popular with both domestic and foreign visitors. It is particularly attractive during fine weather, when it offers spectacular views of the city, and it is indispensable as a fast and comfortable connection with the old town centre. In seeking to preserve the natural environment in the wider area of the Castle Hill, the funicular is the right choice, while at the same time being an exciting experience with which to begin your visit to the castle.

Designers Miha Kerin and Majda Kregar of the Ambient design studio were awarded a Gold Medal for the design of the funicular railway in the category of best achievement in industrial design at the 21st Ljubljana Biennial of Industrial Design (BIO 21) in 2008.

The History of the Idea of the Funicular Railway

At the end of 2006, the Municipality of Ljubljana connected the Ljubljana Castle with the old town centre with an urban means of passenger transport – a funicular railway. Due to spatial and design requirements, the best solution proved to be a cable car or, more specifically, a funicular railway. At the end of 2010, we transported the millionth passenger to the castle, in the middle of August 2014 the two millionth, in May 2017 the three millionth and already in April 2019 the four millionth passenger.

However, the idea, the desire and the need to build a funicular railway that would connect the old town centre and the Ljubljana Castle did not arise at the beginning of the 21st century, but date back more than a century.

Dr Ivan Hribar, the Mayor of Ljubljana, wrote in a letter to the Austro-Hungarian authorities of the time: “Because the view from the spaces in question (of the Ljubljana Castle) are charmingly beautiful, and because it would be good to make use of the current shady courtyard, if only we built an elevator with which one could reach the top for a mere ten kreutzers or less, it would no doubt attract many visitors, particularly on summer evenings.”

The letter, in which the mayor proposes an initiative to purchase the castle for the city, was sent in 1897. Ideas regarding a means of transport continued to take shape in 1905, when the Municipality of Ljubljana purchased the castle, this time on the part of architects Boris Kobe and Edo Mihevc. The final project was taken up in 2005, and the first passengers were transported by funicular in late December 2006.

The lower funicular station is located in Krek Square opposite the Ljubljana Central Market. The railway tracks were built just outside the medieval walls, so as not to interfere with the layout of the former medieval city.

Construction of the railway revealed the ruins of the medieval defensive wall, which were strengthened and displayed along the entire length of the tracks. Similarly, at the lower station, the remains of a defensive moat can be observed along the foot of the defensive walls, on which houses were subsequently built.

View a 3D animation of the funicular ride:

Information about the journey

Information about the cabin

Operating time of the Funicular Railway

See also the extended pricelist in combination with guided tours of the castle.