The Ljubljana Castle / Why visit the Castle? / Castle Attractions

Every corner of the castle is an opportunity to discover and learn something new. When you are on the Castle Hill, whether outside or in any of the rooms, your path will be enriched by many historical and current attractions, even some you do not expect. It is worth returning to the Castle Hill, as each visit can be a completely different experience. Allow yourself an open path to ever-new experiences. We will be happy to welcome you every time.

When time stands still and loses its meaning, the castle scribe picks up a calligraphy pen and takes you on a trip to the distant past.

Wandering around the castle and its premises, you will encounter the Castle Scriptorium in the Castle Chapel (Monday to Friday, 10.00 - 17.00). There you will become familiar with the old scripts used by master scribes in the past and have an opportunity to closely examine initials, reproductions of ancient documents, scribe’s tools and many other fascinating aspects of calligraphy. You can entrust the castle scribe with your name and take away an attractive souvenir, while at the same time gaining an appreciation of the beauty and value of the written word.

A tactile model of the Ljubljana Castle has been placed in the Castle Courtyard. With its legend in Braille, the model enables blind and visually impaired visitors to become familiar with the Castle.

Increased access to cultural heritage is one of the most important strategic orientations of the city’s cultural and social policy, particularly with regard to physical and sensory access for visitors with various impairments. In 2013, the city’s Department of Health and Social Security therefore came up with an initiative to construct a tactile model. At the Department of Culture, it was decided that the most suitable place to locate this kind of model would be the Ljubljana Castle, which has the greatest number of visitors in Ljubljana.

The implementation of the tactile model was taken on by the Ljubljana Castle, in cooperation with the architecture bureau Ambient and the companies RPS and Livartis. The model is cast in bronze and, in addition to the legend in Latin script, also has a legend in Braille. It was first presented to the public on 14 October 2013, the day before the International White Cane Day. The white cane is a faithful companion of the blind and visually impaired, and signals their presence in our environment. 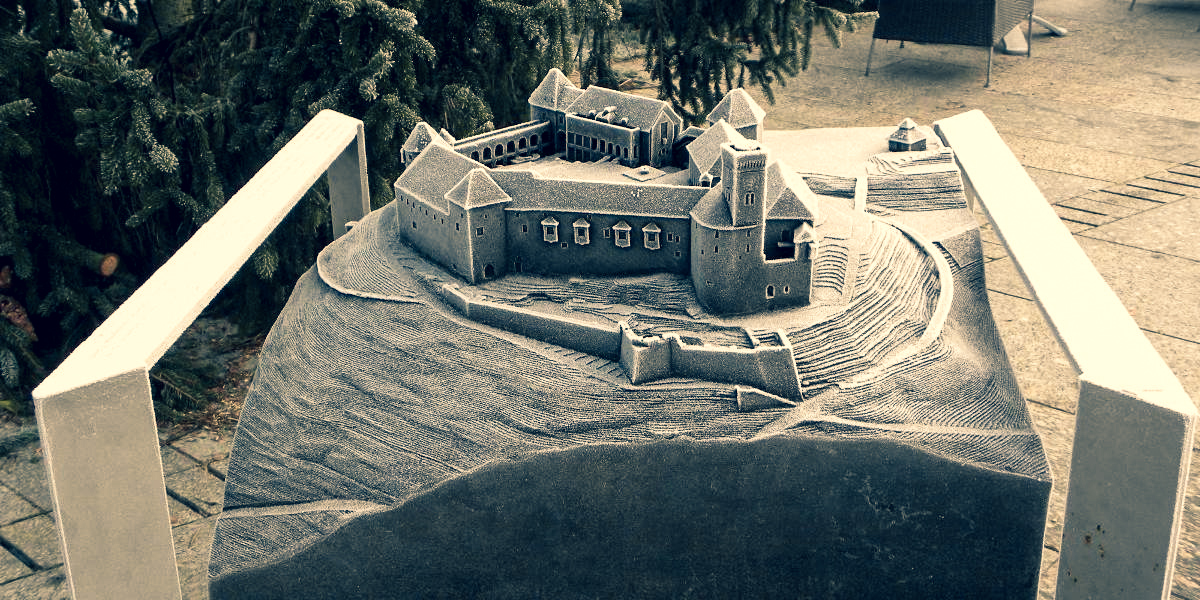 During warm and sunny summer months, Castle Pipers, dressed in replicas of original clothes, blow their instruments at the Ljubljana Castle Viewing Tower.

Although the Castle was once owned by the State Governor, it was the bourgeois who protected the town and the town hill. In addition to the bourgeois fortress (Šance), townspeople also took care of the Pipers’ Tower. This was in fact a reshaped entrance tower from the times of Frederick.

On a wooden landing that was set up around the Pipers’ Tower (first mentioned in 1544), Castle Pipers would blow three trombones and one cornet every day at 11 a.m., thus announcing to towns people that noon, i.e. lunchtime, was nearing. It is not known when exactly this custom died out; however, sources still mention it in the 17th century. Certainly, playing music was not their primary task, but it is the one that was revived in 2010 due to its attractiveness and in memory of Castle Pipers. At present, sadly, Castle Pipers no longer play at the Pipers’ Tower, because the latter, standing in close proximity of the Viewing Tower from 1848, was severely damaged.

The project is being implemented in cooperation with Ljubljana Tourism.

Pick me up and read me! The project ‘Knjigobežnice’ (Book Vanishing Points), which encourages people to read and exchange books, now has its own space at the Ljubljana Castle as well.

On presenting ‘Knjigobežnice’, its initiator Nina Kožar wrote that self-initiative is a key aspect of the project. In the spirit of self-initiative, we have therefore undertaken the project ourselves at the Ljubljana Castle Public Institute. We have purchased all of the material required for the construction of bookshelves designed by Klara Zalokar and Klemen Zupančič from the creative tandem Handmade in Moste, and on the basis of their plans have built bookshelves that will be placed in various locations in the Ljubljana Castle in October 2013. During the autumn-winter period, these are appropriate locations in the lower and upper funicular stations, in the lower Lapidary and under the arcades beneath the Estates Hall. In the spring-summer months, the bookshelves will also find a place in the shade under the castle chestnut trees, which is a particularly pleasant location for reading.

We therefore encourage visitors to read and exchange books, which is the guiding principle of the project ‘Knjigobežnice’. “Leave a book, take a book!” is written on the castle ‘book vanishing points’, so you are warmly invited to read books at the Ljubljana Castle and to bring them along with you for others to read! 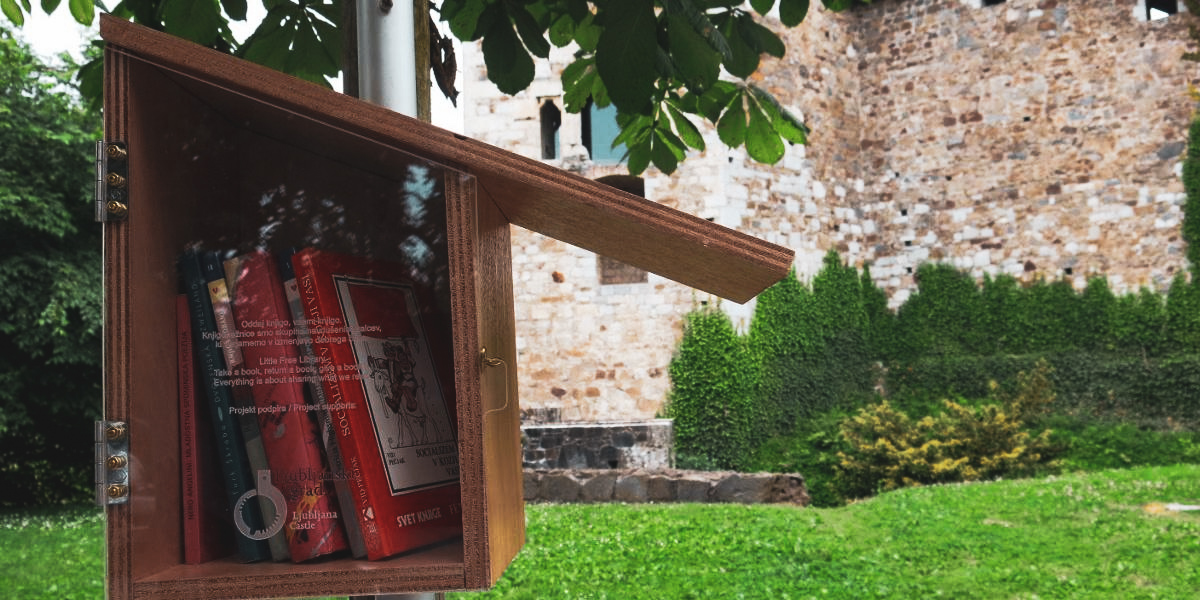 Sgraffito Paintings in the Archers Tower

On the walls of the top floor of the Archers Tower, in the space of the Strelec Restaurant, there are paintings executed in 1952 and 1953 by the architect, painter and university professor Boris Kobe (1905–1981) and the painter Marij Pregelj (1913–1967).

In creating the works, the artists chose the sgraffito technique (from the Italian sgraffiare, to scratch), which was used from Gothic times to decorate building facades, as it was considered to be more durable than the fresco technique. The essence of this technique is the application of several layers of thin plaster of different colours. In order to compose the images in the Archers Tower, the artists produced paper or cardboard templates (the originals are kept by Boris Kobe’s family), with which they transferred the drawing to fresh layers of plaster. Using a special spoon, the chosen motif was then formed by scratching the plaster to the desired colour layer.

The paintings, which were restored in 2008, flow in a broad strip around the entire tower, with breaks at window and door openings. The scenes are framed and create a comic-book image of the story. The artists found the idea for the visual image of the walls of the Archers Tower in the motives of Slovenian folk songs and tales. Nine stories from the Slovenian folk tradition are portrayed, two of which are only partially preserved. Three of the nine stories are untitled and texts flow beneath certain scenes from the stories. The authorship of the images accompanying the individual stories can be determined by the letters K (Kobe) and P (Pregelj).

In the lower floor of the Archers Tower, where visitors enter from the Castle Courtyard, a fragment is preserved on the vaulted ceiling that is also in the sgraffito technique, showing scenes of farm work (the grape harvest).

In castles, a reliable water supply was almost as important to inhabitants as protection from enemy attack.

The storage tanks into which water from roofs and courtyards flowed and the wells from which groundwater was drawn were always carefully covered, while the immediate environment of the wells and tanks had to be paved to ensure that the water supply remained clean. A stone ring was usually erected around the top of the shaft, or sometimes just a raised wooden rim to prevent dirty water from entering the shaft. Wooden buckets attached to ropes or chains were used to obtain water from the wells. In order to draw water more easily, the rope or chain was run through a pulley or sometimes attached to a winch or a wooden wheel.

On World Water Day 2016, we published a brochure presenting the wells at the Ljubljana Castle and their immediate environments. In addition to being a valuable archaeological source, wells are objects in which the established technical principles and laws are closely interwoven with the personal creativity of the builders. In parallel with the historical and technical characteristics of the individual wells, the brochure also presents the interesting facts and legends associated with these sources of life at the Ljubljana Castle through the centuries.

The brochure can be found on this link, and a printed version is available at the Info Centre at the Ljubljana Castle.

The publication of the brochure has been co-financed by the Municipality of Ljubljana. 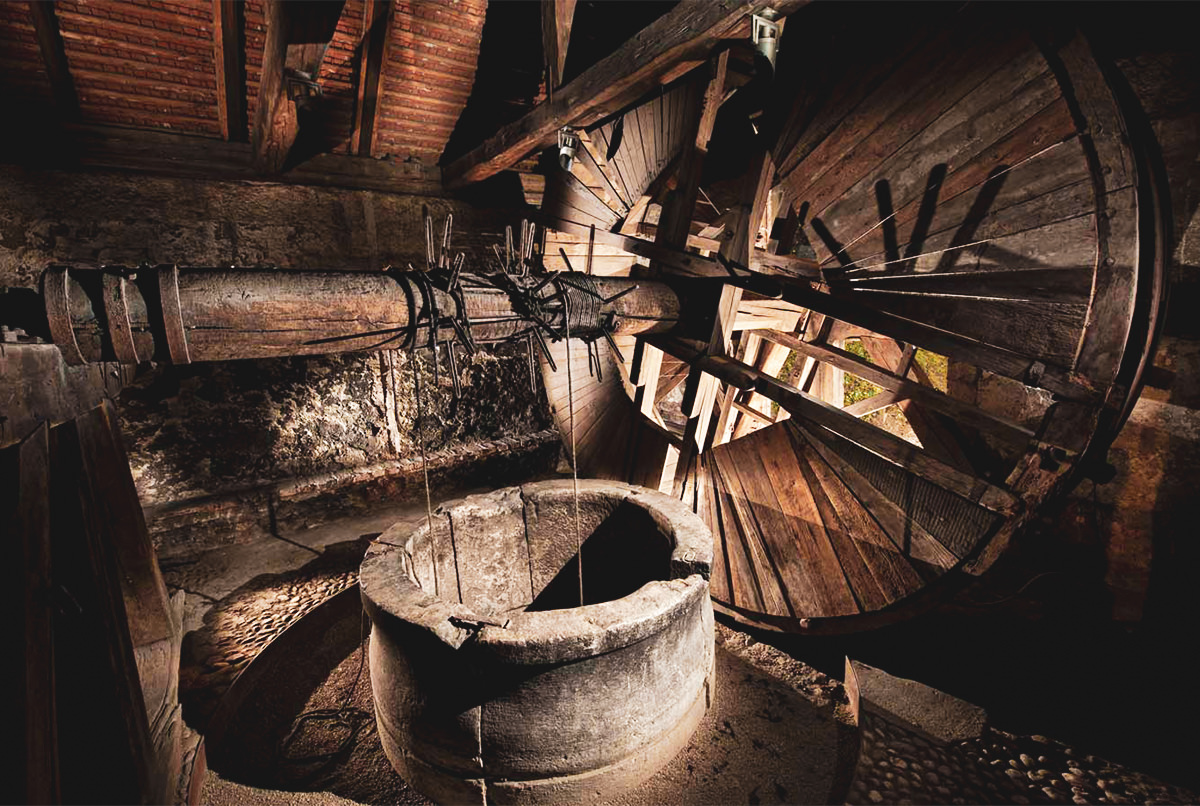 The common parsnip is one of the most frequently found meadow plants, blooming at the time of rowen on meadows and along paths. The Fleischmann’s parsnip, however, is a special plant that differs from the common parsnip for its double feathery leaves, the shape and serration of leaves and, partially, also by the colour of leaves, which is a somewhat darker green than that of the common parsnip. Other than its habitat at the Ljubljana Castle, where the plant grew from 1819 to around 1835, no other habitat was found for the plant. There is no uniform opinion about its emergence. Some claim that the plant emerged as a hereditary change (a mutation) at the Ljubljana Botanical Gardens (Mayer, 1960), while others believe that it in fact grew at the Ljubljana Castle (Voss, 1885).

The fact is that parsnip, as a vegetable, started to be grown in Middle Ages and was used for a long time, until it was superseded by carrots and potatoes. In addition to having a high content of water, the taproot of this annual also contains sugars, proteins, pectin and even a bit of fatty and essential oil. The British still cherish it. So, it is possible that the mentioned parsnip is a variety of the common parsnip, which was once grown. Irrespective of this, however, many are still bewildered by the fact that the variety was only preserved at the Ljubljana Castle and, later on, at the Botanical Gardens. This by no means diminishes its value, since many new varieties were obtained by making a selection of special features in an attempt to grow something new. Either of the mentioned claims is possible, since neither changes the fact that the plant was only preserved at the Ljubljana Botanical Gardens.

On the Trail of Fleischmann’s Parsnip is the name we have given to a nature trail on which we organise guided tours in cooperation with the Botanical Garden of the University of Ljubljana.

On the Trail of Fleischmann’s Parsnip e-brochure (PDF)

I know that a short rest is welcome while walking around the castle. So take a break and stop by my beloved Castle Coffee House. They have really great cakes.