The Ljubljana Castle / Why visit the Castle? / Castle Renovation

The Renovation and Revitalisation of the Ljubljana Castle

With selected photographic material, which has been preserved by the architectural bureau Ambient, we seek to guide you through yet another story of the Ljubljana Castle – the story of its fundamental revitalisation in the 20th century.

The Symbol of Ljubljana

Today, the Ljubljana Castle with the Castle Hill is an interesting tourist spot for foreign and domestic tourists, as well as being a popular walking destination for residents of Ljubljana. This is conformed by the fact that the castle is visited by over a million visitors annually.

The Ljubljana Castle is the cultural and social centre of the capital, where numerous cultural and arts programmes, protocol and social gatherings, and other events take place all year round. The Viewing Tower offers wonderful views of the city and the wider surroundings, while visitors can also visit the Virtual Castle and a range of permanent installations – the Exhibition of Slovenian History, the Penitentiary, the Museum of Puppetry, Castle Weapons and i-Ljubljana – as well as strolling through the other spaces with various content. At the castle, visitors will also find the Castle Café, restaurant Na Gradu, Strelec Restaurant and Castle Wine Bar and Shop Strelec.

The Castle renovation works are being carried out in accordance with the plans of the Ambient Project Design Office (Edo Ravnikar Jr., Miha Kerin and Majda Kregar). Continuing archeological excavations are led by archeologist Martin Horvat of the City Museum of Ljubljana.

According to the designer’s assessment, just over 80 percent of the renovation of the castle has been completed so far, including the static refurbishment.

The following renovation works have already been completed: 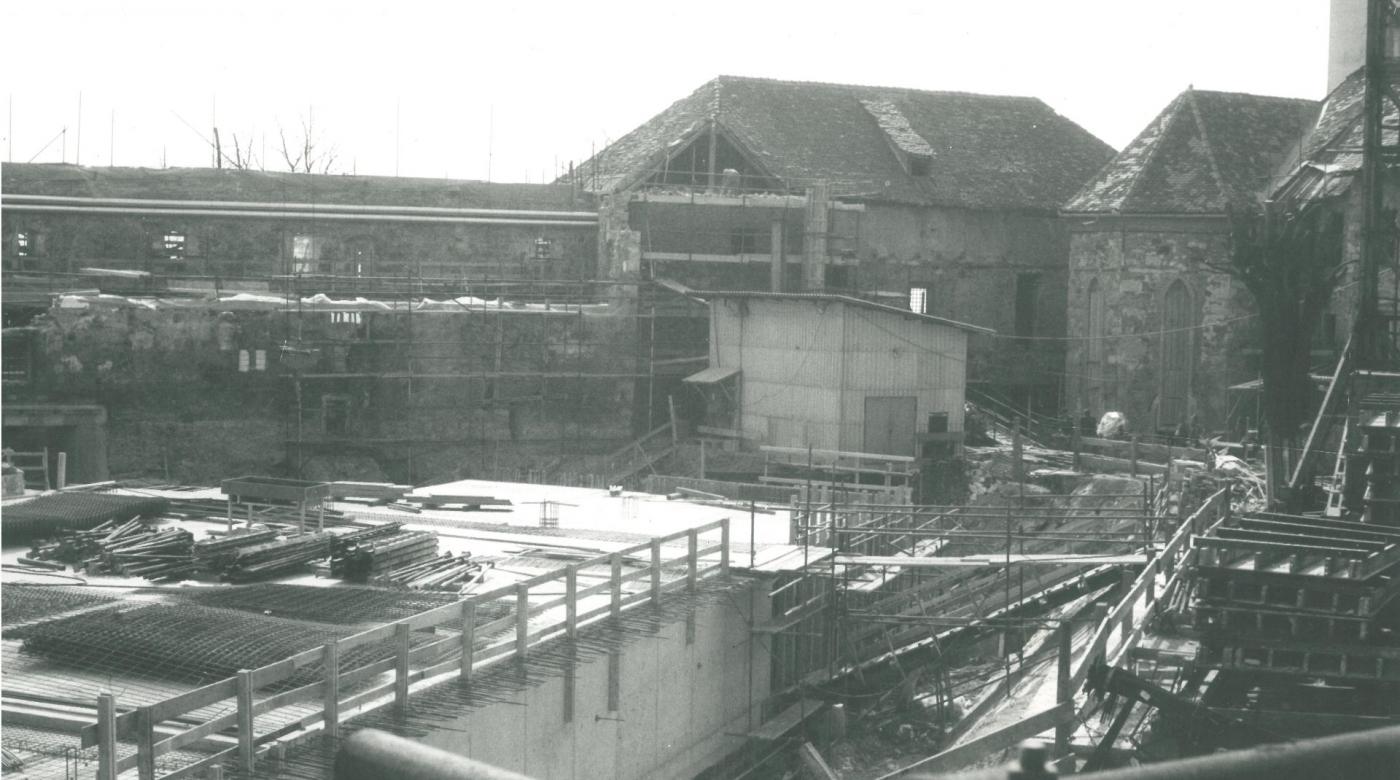 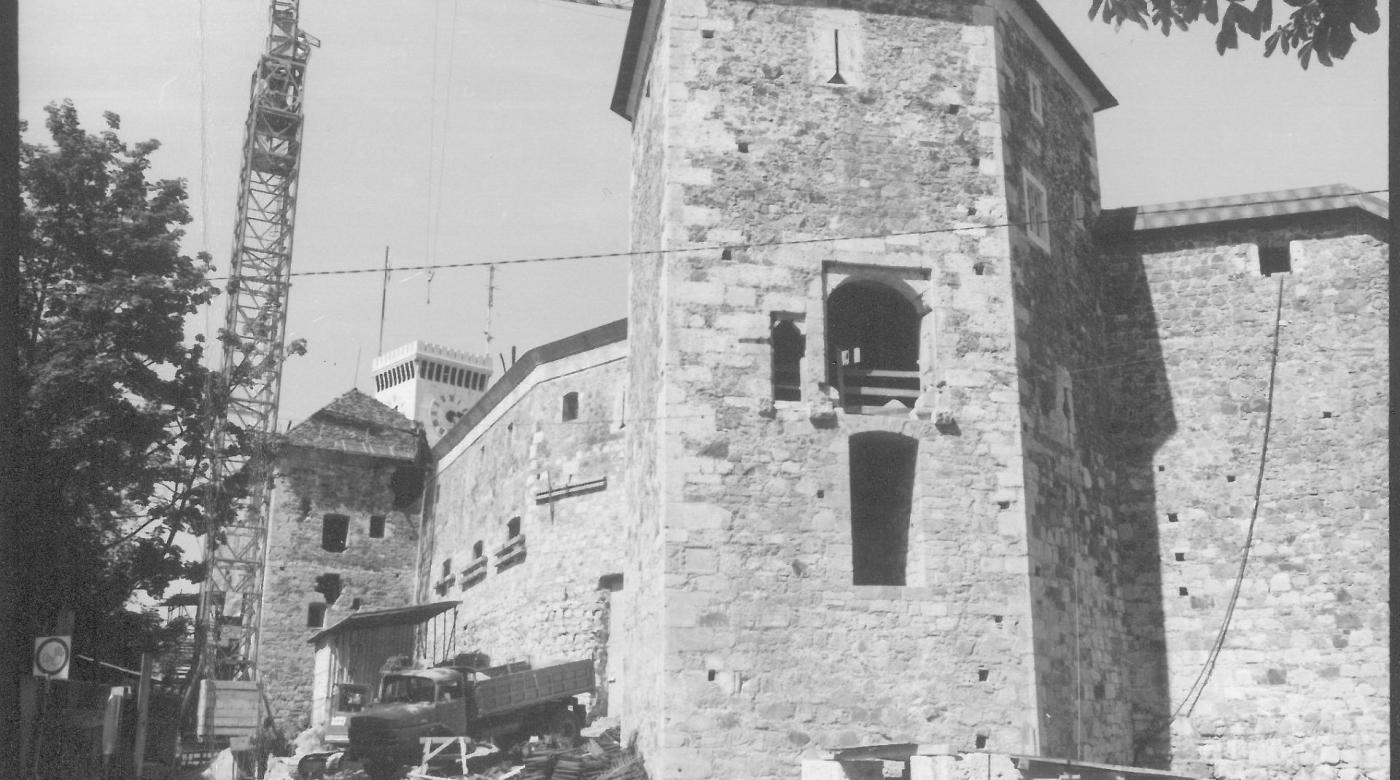 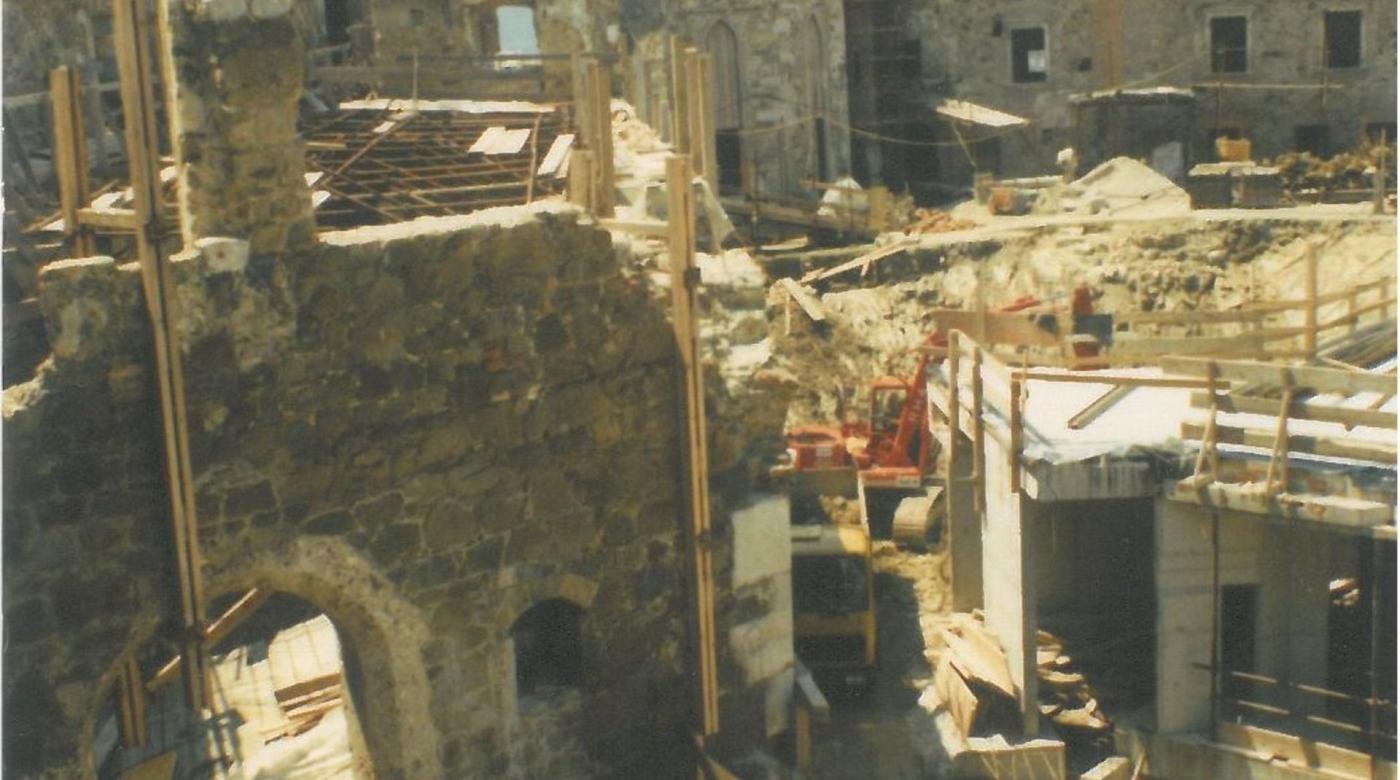 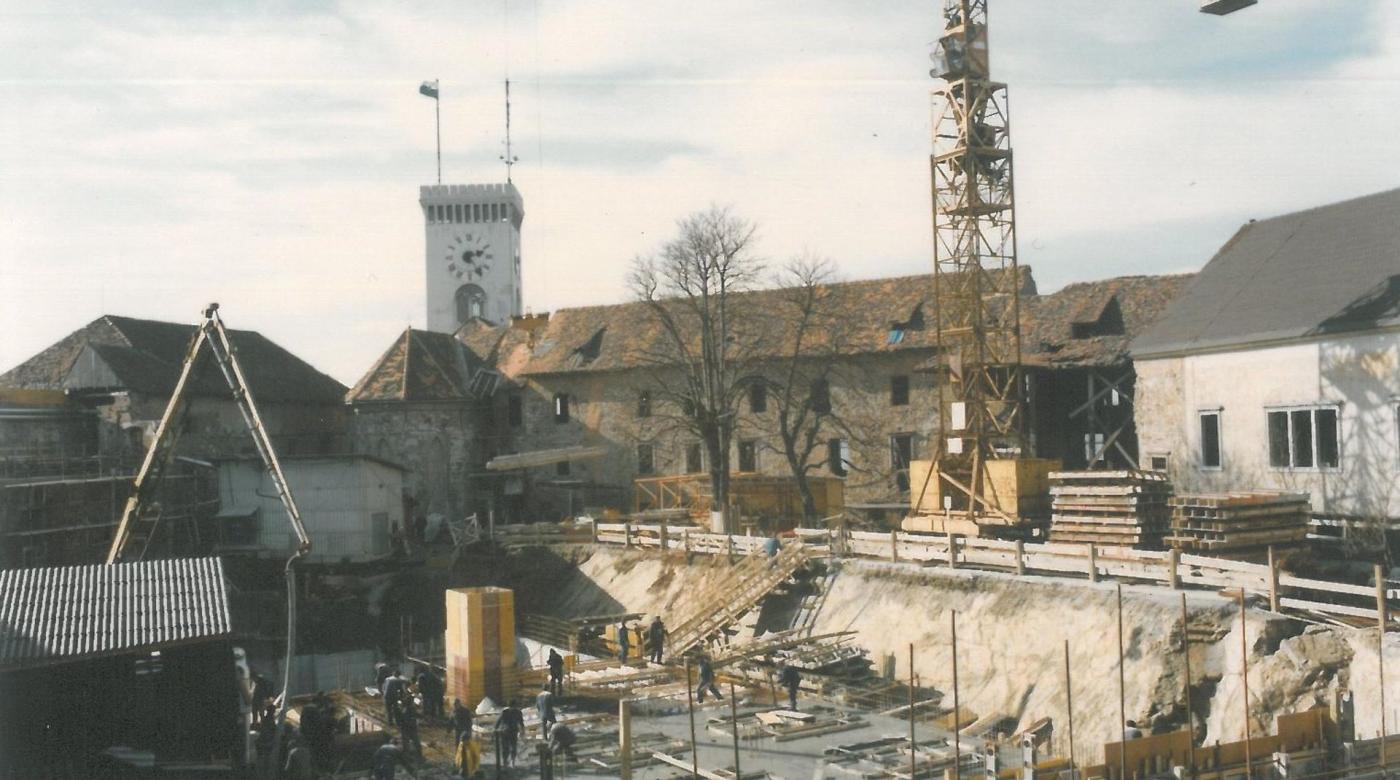 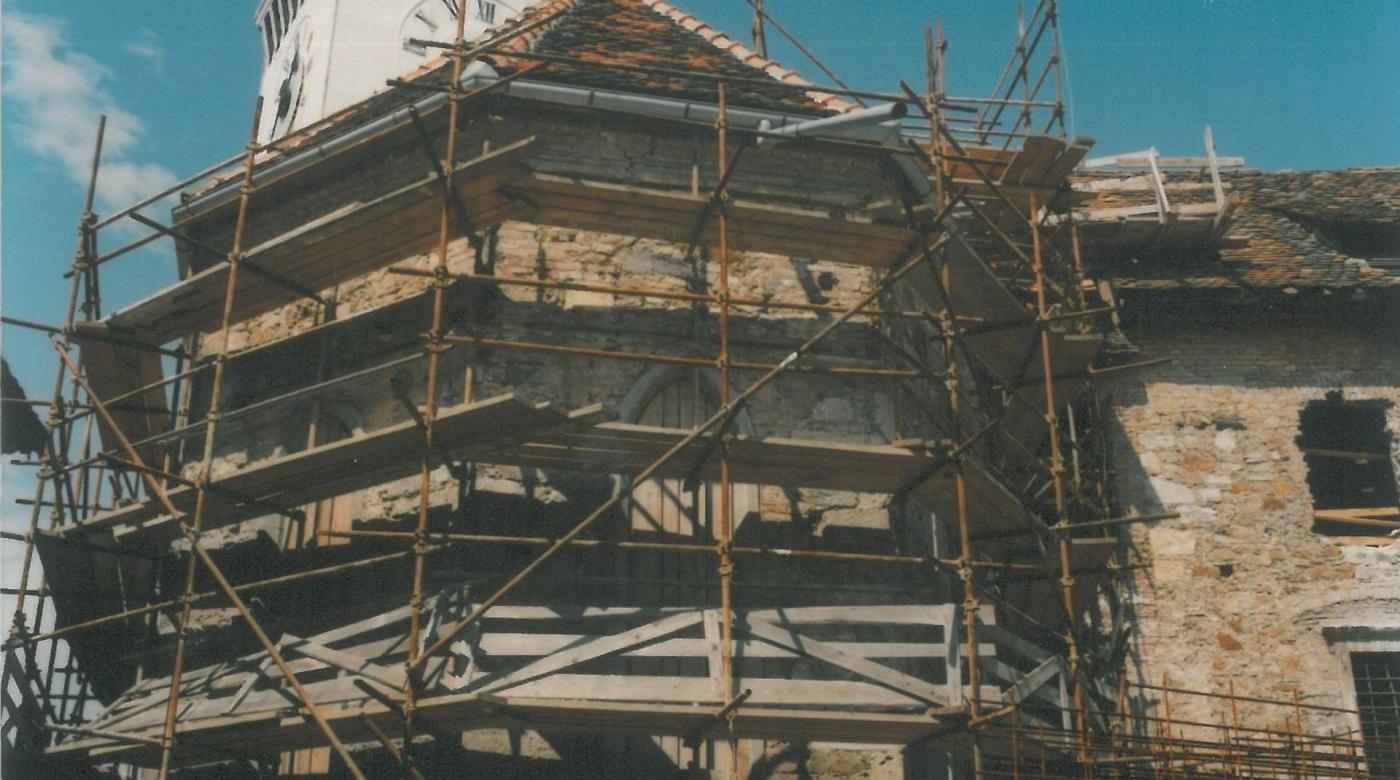 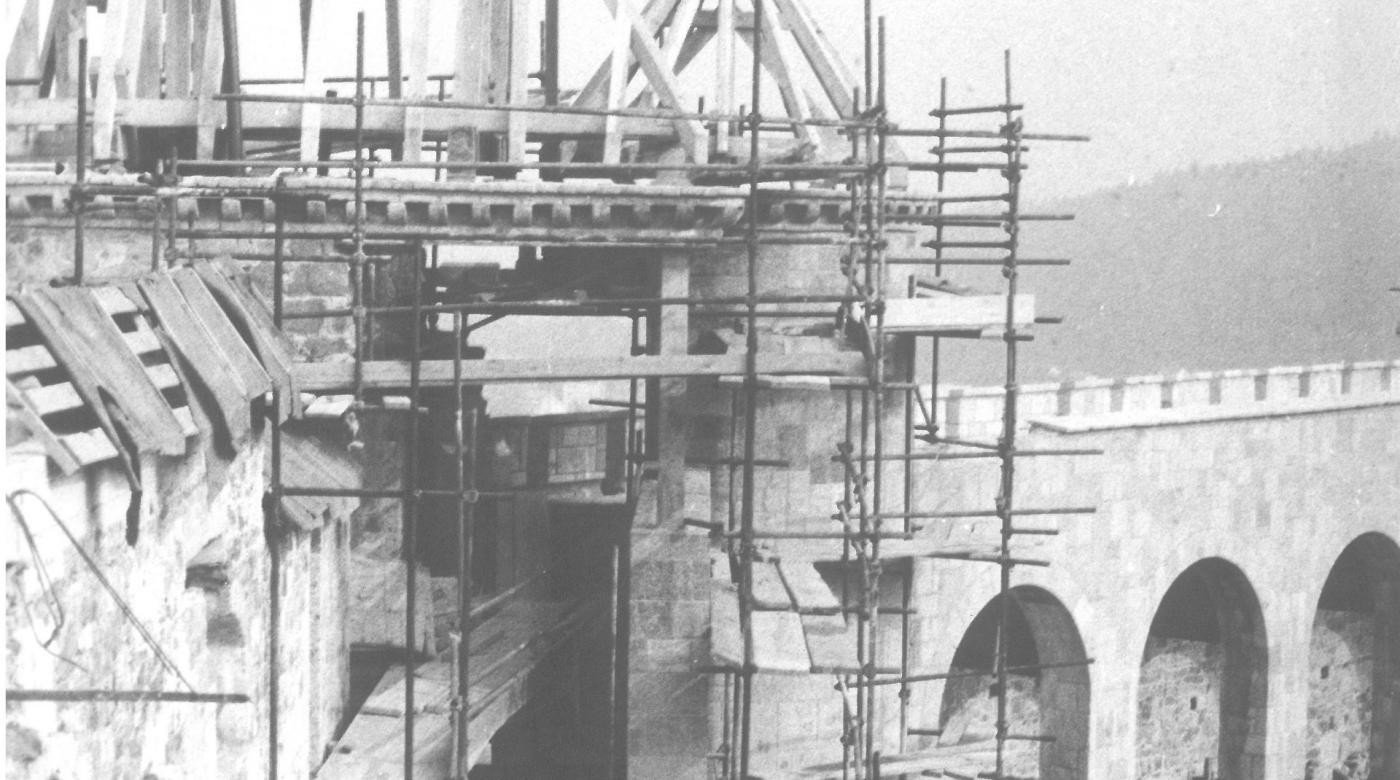 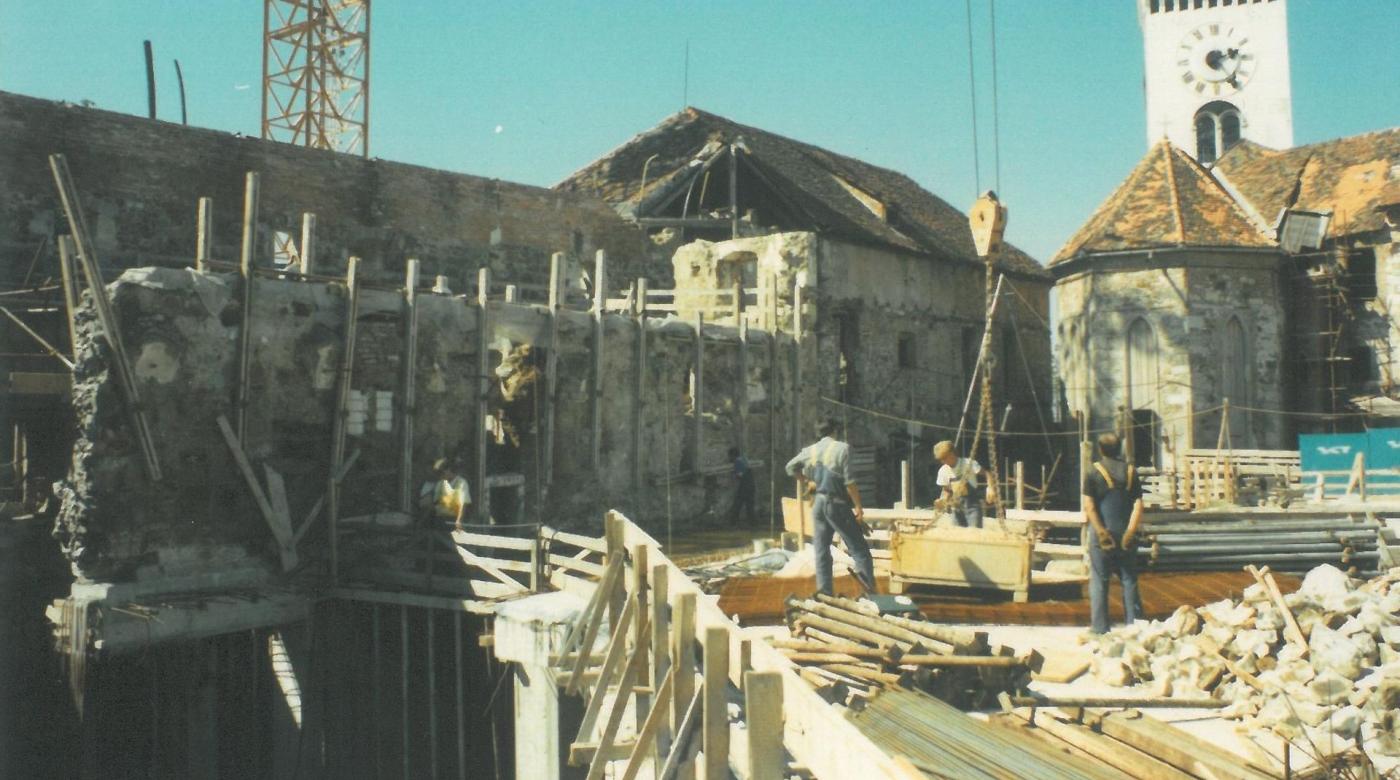 In 2000, the Estates Hall was finished, providing the conditions for the Ljubljana Castle to start hosting more important cultural and social events.

On 9 May 2001, the Virtual Museum began operating. The museum was donated to Ljubljana’s citizens and visitors by the company Tobačna Ljubljana to mark its 130th anniversary (with the renovation of the Virtual Museum and the change of the projection to focus on the history of the Ljubljana Castle, the space was renamed the Virtual Castle in March 2012). The first museum of its kind in Slovenia, it was designed by the City Museum Ljubljana, RenderSpace, Navidezni interaktivni sistemi, Kibla, TSE and Pristop. In the same year, the static rehabilitation of the entrance bridge and the viewing terrace was undertaken, while the castle’s main gates were also installed.

Since 2002, the castle has been free of scaffolding, and the further renovations have been executed entirely via the underground service area. Most of the renovation works undertaken in 2002 were performed in the area of the future Palatium and Frederick’s Tower, including the adjacent cloakroom and sanitation facilities, as well as in the connecting tract to the Estates Hall.

In April 2003, the representative Palatium Hall was completed. Together with the new cloakroom and sanitation facilities, as well as the special access for disabled persons, it significantly improves the castle’s offer.

An important milestone in the renovation of the Ljubljana Castle during 2004 and 2005 was the process of solving the logistical problems of access and transport to the castle. The best solution turned out to be a funicular railway, with the lower station in Krek Square and the upper station on the edge of the castle walls. The first passengers “got a lift” in the funicular railway in December 2006. The length of the railway between the lower and upper stations is 117.69 m, and the difference in height is 69.70 m.

In 2007, the project documentation for obtaining building permits for the continuation and completion of the renovation was prepared.

The year 2008 followed the vision of reviving the Castle Hill and the castle’s facilities. Within the framework of the partial regulation of the surroundings, the Plečnik path, which was destroyed in World War II, was restored, and now runs around the Ljubljana Castle. In the area of the fortress (Bastija), the footpath is not completely regulated yet. The works are expected to be finished after archaeological research there is completed. In October, renovation works started on three towers: the Viewing Tower, Frederick’s Tower and the Erasmus Tower. On 3 December 2008 – the birthday of Slovenian poet France Prešeren, which is marked by the cultural festival known as “That Happy Day of Culture” – the formal opening of the restored sgrafitti, completed by Boris Kobe and Marij Pregelj, was held in the Archers’ Tower. Since 1953, the sgrafitti had adorned the former brewery and coffee shop, and they were restored by the Restoration Centre of the Institute for the Protection of Cultural Heritage of Slovenia under the leadership of Ljubiša Milić. At the end of December 2008, a contract was concluded for the completion of the tract J (the space between the chapel and the Hribar Hall), which would host the Permanent Exhibition of Slovenian History. Construction works began in January 2009, the same year that the renovation of the aforementioned three towers was completed.

In June 2010, the Permanent Exhibition of Slovenian History was opened on all three levels of tract J, and the partially renovated Rock Hall radiated the colours of the new Lounge Club Goodlife in tract M. Meanwhile, renovation continued in the KLMT Lapidary, which was renamed the Upper Lapidary. August 2010 saw the opening of the Castle Restaurant.

In 2011, the new administration of the Ljubljana Castle, which on 1 April 2011 became an independent public institution, moved into the completed Tract J above the Permanent Exhibition of Slovenian History. Despite the bankruptcy of key construction companies, the Upper Lapidary was finally completed and work was commenced on the renovation of Tract A. In addition, the rooms of the former Virtual Museum were reorganised and a new programme got underway in the Virtual Castle.

The key project in the renovation of the Ljubljana Castle in 2012 was the completion of Tract A, the Archers’ Tower, where the demanding renovation on all levels of the present entrance tower came to expression as the high quality result of excellent cooperation between builders, architects, restorers and conservators. Within the framework of the renovations, the sgrafitti by Boris Kobe and Marij Pregelj in the entrance level of the tower were restored. At the end of 2012, a new restaurant called Strelec (Archer) was opened in the highest level of the tower.

In 2012, the renovation of the solitary confinement cells beneath the Palatium was also completed, creating the space for the permanent exhibition entitled Penitentiary. In addition, the lightning conductor system was completely renewed, which is not as simple project on a complex like the Ljubljana Castle. The same year marked the beginning of the renovation of Tract K above the present Castle Restaurant, which will be the location of the most important multipurpose hall, named after the former Ljubljana mayor, Dr Ivan Hribar. Due to a lack of investment funds, the renovation project was divided into two phases, the first of which commenced in 2012.

In 2012, a great deal of work was also undertaken in the area of project documentation for the further renovation and completion of the Ljubljana Castle, particularly regarding the preparation of projects for applications to various EU funding schemes. The most important of these projects were the Energy Redevelopment – a demanding project that, in addition to investment documentation, included the preparation of the entire building statics and a study of alternative energy sources – and the renovation of Tract E1, which would enable further renovation on the level above the Estates Hall. Despite receiving the maximum number of points, both applications failed for bureaucratic reasons. One part of the planned energy redevelopment, involving hydraulic balancing and the renewal of the gas water heater, was therefore funded from regular investments by the Municipality of Ljubljana in 2013, as was the entire renovation of Track E1.

In 2014, we completed the renovation of the wedding halls and finalised the technical part of the project “Ljubljana Castle – Museum of Puppetry”. This highly multidisciplinary and connective project begins in the puppet depots of the Ljubljana Puppet Theatre, continues through the puppet paths (Krek Square–funicular–Ljubljana Castle), reaching tract D, E on the upper level above the Estates Hall. It continues as the Museum of Puppetry, with a permanent exhibition, workshops and animation, in tract S, in the vicinity of the new Castle Theatre, which is also intended for marionettes. It finally concludes in the support programmes, where the last details of puppets are revealed. The project is co-financed by the European Union. The installation of the puppets and the other content in the Museum of Puppetry at the Ljubljana Castle was carried out in the first half of 2015.

Investments in the renovation and revitalisation of the Ljubljana Castle in 2015–16 included: the entrance pavilion, the castle shop, the wine shop, the S Gallery, and the Hribar Hall, as well as energy refurbishment and the provision of project documentation.

In 2016, the castle vineyard was constructed.

In 2017, the renovation of the Hribar Hall was completed. Restoration works commenced in the space beneath the Castle Coffee Shop, which will be used for executing educational programmes. In the middle of October 2017, minor renovations in the Rock Hall enabled the Ljubljana Castle Jazz Club to started operating.

The most important projects undertaken in 2018 include: completion of the construction works for the premises of the future wine cellar, and the renovation of the spaces under the Castle Coffee Shop, one part of which is dedicated to the Dragon’s Den – a space for various creative and educational programmes – while another part is devoted to the modern Info Centre and the Castle Shop, with its own brand “Friderik”.

In 2019, we completed work on the premises of the wine bar and shop and built the terrace of the Castle Wine Bar and Shop, which opened its doors at the beginning of September 2019. We renovated the Castle Coffee Shop and the “S” Gallery, and remodelled the premises of the former Info Centre in the Erasmus Tower, where the installation Castle Weapons will be on display from April 2019.

In November 2020, we completed construction work on the Bastion, which, with its new paved terrace and view of Congress Square, is now even more attractive as a place to sit.
By the end of the year, we also completed work on the renovated space that serves as a passageway from the “S” Gallery to the tract below the Palatium and on to the Castle Courtyard. This intervention, which included the construction of a staircase and a lifting platform as well as the renovation of the space, supplements the previously renovated parts of the castle’s underground area. In addition, the renovation enables people with reduced mobility to access the “S” Gallery, the Castle Theatre and the Upper Lapidary.

In 2022, the City Municipality of Ljubljana completed the construction of the new building Na Stolbi, with which the Ljubljana Castle Public Institute acquired new administrative premises for part of its employees.

Here’s to life in our wine bar and shop! There we have a really biiiiig selection of top quality Slovenian wines, so you can come back several times to try everything. Would you prefer white or red?